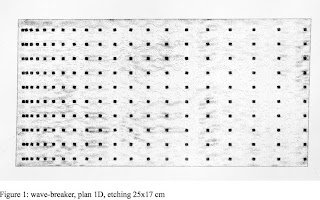 wave-breaker, plan 1D, etching 25x17 cm
Abstract
Architectural drawings, such as design sketches, plans, sections, axonometrics and perspectives, underwent a dramatic shift since the advent of computer aided design (CAD) tools. While most CAD tools reproduce conventional drafting methods, they tend to be reductive in their programmatic rigidity. Users are forced into a linear and predefined design process and often frustrated by the lack of haptic feedback. The structural complexity of CAD programs often obscures the underlying generative methods.
In search for novel methods of CAD application - presented in the sketches, drawings and plans for the “Wave-breaker” project (Land Art / Installation Proposal, Muscat 2011) - I developed a series of methods and tools to overcome the aforementioned shortcomings of standard CAD. Boundaries of drafting software are expanded by introducing scripting and coding. The expression of data (text and numbers) inside the drawing aims to re-introduce the haptic quality of conventional drawing. A procedural approach of layering graphic elements and data with a constant visual update empowers the designer/programmer to harness the computational power of CAD applications. 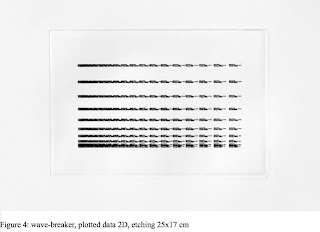 wave-breaker, plotted data 2D, etching 25x17 cm
The “Wave-breaker” project challenges conventional architectural drafting methods as it is a landart and landscape installation. The project narrates the story of seemingly abandoned industrial artifacts (the concrete precast wave-breakers) in a desert landscape. It combines the technical precision of construction documents with the poetry and fragility of landscape drawings. Plan nor section suffice, rather a map of layers of information – landscape, artifacts, data – form the new digital environment. The underlying code regulates distribution, arrangement and rotation of the objects. 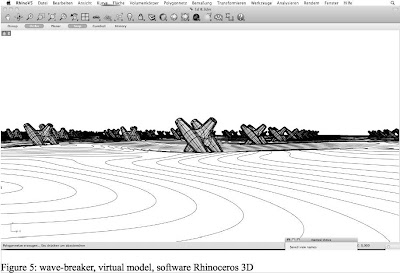 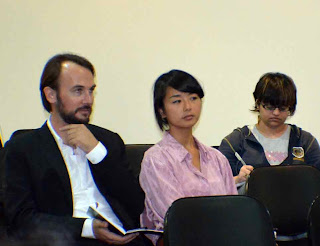 Aurel von Richthofen is an architect, researcher and teacher invested in parametric design and cybernetic urbanism. Aurel grew up in Berlin and Geneva. He studied architecture at ETH Zurich and at Princeton University. He is the principle of aurelVR registered architects in Berlin. Aurel von Richthofen was Visiting Assistant Professor at the Ohio State University in Columbus Ohio and lecturer at the FTH Berlin and TU Berlin. Since fall 2010 Aurel is Assistant Professor for Computer Aided Design and Architecture at the Department of Urban Planning and Architectural Design at the German University of Technology in Oman (GUtech).
link: Aurel VR architecture
Posted by Transdisciplinarity at 6:03 PM 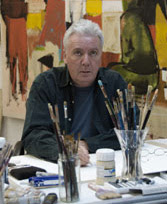 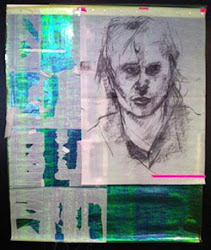 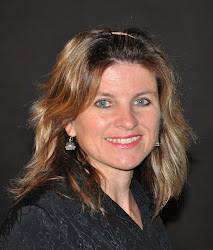